Dexter posed for us today. He's been modelling for decades and his body is a fine machine...he exercises a lot, he teaches high school wrestling, and he eats only the good stuff (that means it may not taste great but it's good for you). He's short and compact. Not an ounce of fat on him. Which you would think would make it easier to draw, yes? 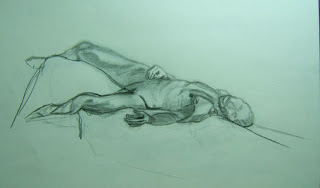 No. I kept seeing squares and triangles and the muscles in his chest and stomach and ribs and...well, just could not "see" it correctly. The drawing looked dead, lifeless, dull. I became angry at myself for not being able to get it "right."

Then Charles talked to me about the life-force inside and asked me to try to draw as if I'm capturing that life-force. That force rounds everything because it is pushing on the outer edges of the body. Then I could start to "see" it. (Damn, he's a good teacher!)
So I began again, after 2 hours of struggling with the first one. 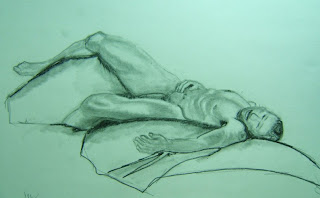 Then, without measuring anything, and begining with his left knee and leg, I did this one. Much better!
See how the weight of body is pushing down on the pillows. See how that right leg has mass and strength but more roundness (roundness doesn't mean softness but I think it shows the mass of that thigh and upper leg).
Ah...another difficult pose. Another struggle. Perhaps the struggle never ends but it's always nice when a light goes off inside and you can see it and go beyond just draftsmanship to something more...I could have worked for another hour on this...or two!
Only 2 more classes :( before the session ends.

That is an amazing difference between the two drawings. You are doing so well with this class.

I think when the 'aha' moment arrives, its blissful. However, I disagree with you. I think the first drawing shows a lot of good structure and form in it and I rather prefer it over the second.

Sometimes the first instinct works best. But in life class all poses are to everyone's tastes. For me, its a back view. I HATE those and find them soooooooo boring. In this pose you had, it is a difficult as there are so many angles to judge. You did well.

Greta drawing. This one has a very nice compositon too. Love the simple lines under the figure, just suggesting his perch. Good work!

What an incredible feeling of life from the second work after that oh so clever piece of teaching. You do response so well to advice, your tutor must be delighted to have you as a student at these interesting life classes. Sad they are finishing soon.

You are doing so well with your life drawing and I also can see much improvement from when you first started posting them. I think the second drawing is much stronger than the first - especially the right thigh - the second shows substance and muscles.
Great job.

Thanks so much, Vicki, Jeanette, Kathy, Joan and Barb :)
Jeanette, it's interesting that you prefer the first sketch. I hated that left leg and could not get it right so maybe my negativity was showing when I gave up and started again. I wish I could be doing this twice a week instead of just one 3-hour session! As for your hatred of the back view - I usually love that! haha