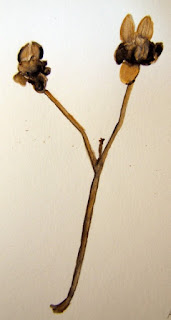 While walking in a nature preserve in Manatee County, FL, I came upon some brush and this little pod stood out for me.  I clipped it and took it home to draw and paint.  I haven't a clue what it is.


Read 2 books worth mentioning while on vacation:

A Piece of the World
by Christina Baker Kline
(It's a fictionalized account of the life of Christina Olson, the woman made famous in the Andrew Wyeth painting, Christina's World.  Well done and interesting with enough research put into the book to make it seem like it could have been Christina's own words.)


Sea Creatures
by Susanna Daniel
(A story with some interesting characters - two main characters have insomnia to the extent that it changes their lives.  A lovely story set in the Biscayne Bay area of Florida, with houses on stilts, living on houseboats, water, and even a hurricane.  I never got bored with it and it made me want to read more of her work but she only has one other book.)

I got a LOT of books for Christmas!!

PAINTING IN MY STILLMAN & BIRN SKETCHBOOK 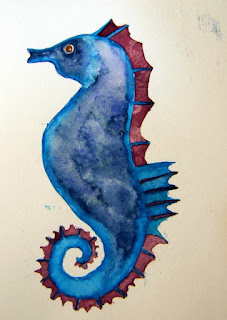 I almost always pack my Stillman & Birn watercolor sketchbooks with me and take it on trips.  Sometimes I open it and paint, sometimes I don't.  We had a couple of chilly, windy, wet days during our 2-week vacation this time so I got out the paints and painted a few little things.


It's mostly about playing with color with these two bright little ones. 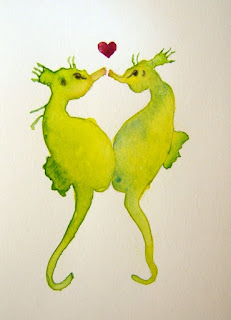 This could make a good anniversary card, Valentine's Day card, etc.  I may make prints of this one.

HAVE YOURSELF A MERRY LITTLE

Wishing all my blogger friends
a wonderful holiday season,
whether you celebrate Christmas, Kwanzaa,
Hanukkah or Festivus.


Take care of yourselves and each other, spend good quality time with your families, and I hope to see you in the new year.
Posted by RH Carpenter 5 comments: 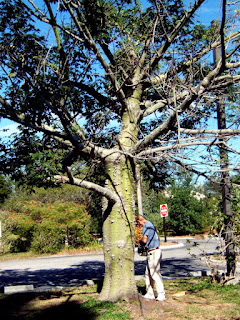 
Sweetie taking a closeup off this truly gnarly tree trunk.  It's a Silk Floss Tree and it has spines which could be dangerous, but it's beautiful.

Closeup of the trunk next - see how spikey it is? 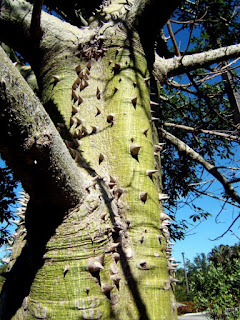 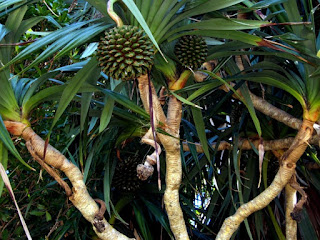 These were taken at the Palma Sola Botanical Park, a lovely place for a nice walk and they have some interesting plants, tree, shrubs, lakes, etc.


This is a pandanus with some spikey globes (fruit) - another gnarly tree! 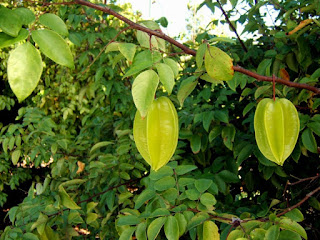 Nothing spikey here, and even edible fruit = starfruit :) 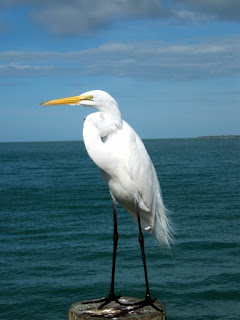 Finish off with this gorgeous great white egret - such a beautiful bird, and so used to humans at this pier that it just posed for us.  Love Anna Maria Island!
Posted by RH Carpenter 3 comments: 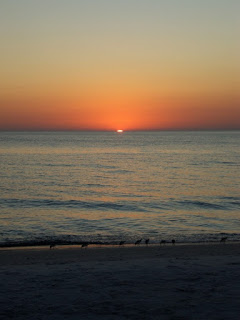 How about a few wonderful beachy sunsets?

Just a few holiday/vacation photos from another wonderful two weeks away on Anna Maria Island in Florida.  Most of the time, it was warm, sunny, and great (we did have a bit of a cold spell for a couple of days but I'm not going to say much about that because while we were going down to 35F at night, it was 25F during the day at home in Kentucky!  It has warmed up here at home (we tell everyone we bring the warmth back home with us!). 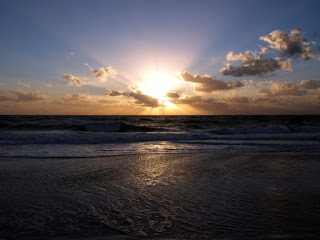 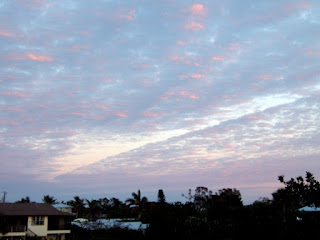 We walked to the beach (North Point) almost every evening to see what the sky would give us, and once we saw this lovely grey-blue and pink blushed clouds over the canal behind the house so we didn't even have to walk to the beach on that cold and windy evening. 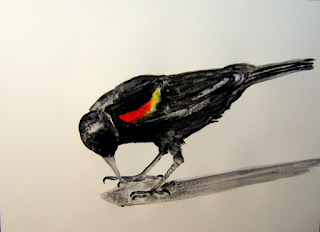 Just returned from 2 weeks away at the beach.  Will share photos as I sort and edit some.  And I definitely will be using this black pigment again on, maybe...a crow or two?  :) 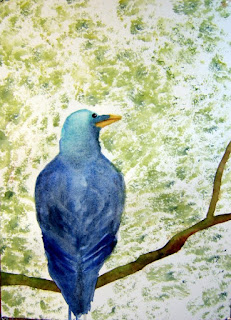 
A crow with the blues.
Posted by RH Carpenter 6 comments:

What does it mean to be so still?
to glide along the ocean floor

like some black-tongued electric eel,to burn through marbled gold and green

a void within voids, and then?It is easier to imagine amphibian,

to know that blood, too, can changeits temperament as quickly as

salamanders change skin, as quickly aseyes of newt and tongues of dog become

incantations, enchantments of artand life just as an animal submerged

arrives as an object of thoughtand becomes stone.

Rita Banerjee is the author of Echo in Four Beats,
forthcoming from Finishing Line Press in February 2018.
She is the executive creative director of the Cambridge Writers’ Workshop
and teaches on modernism, art house film, and South Asian aesthetics and literary theory at the Ludwig-Maximilian University of Munich in Germany,
where she currently lives.
Posted by RH Carpenter 2 comments: 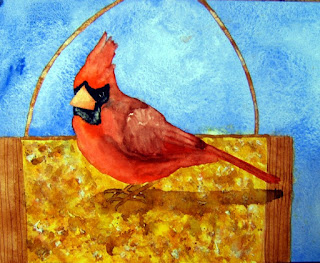 Painted on Arched 140# hotpress paper (10 x 14 inches).  I am liking the hotpress (it makes some nice runs and lifts if you don't let it dry completely before you start playing with it). 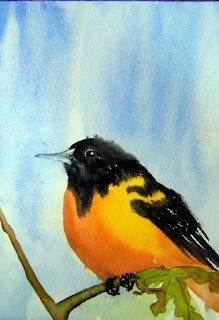 HAPPY BIRTHDAY TO YOU 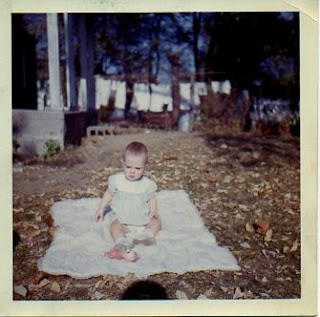 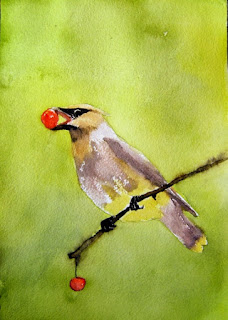 EVERYONE IN ME IS A BIRD


Mind was a prison, ruby linedin its lipstick noir—everything womanI was expected to be, trapped betweenpapered walls. What they said to do, I did notbut only levitated at the burning,the body a water in which I drowned, the lifea windshield dirty with love. What theysaid to think, I thought not but instead mademy mind into a birdcage with wings.


Title from a poem by Anne Sexton


Melissa Studdard is the author of I Ate the Cosmos for Breakfast
(Saint Julian Press, 2014). She is a professor at Lone Star College-Tomball
and lives in Houston, Texas.

Posted by RH Carpenter No comments: 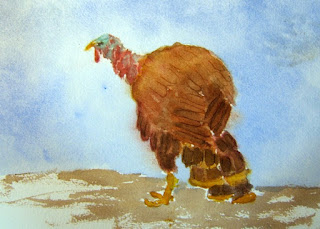 
Hope your tail's not dragging! 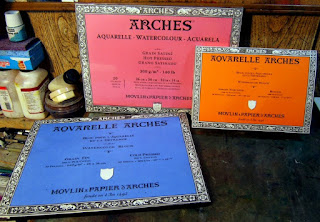 I have purchased a few watercolor blocks in the past.  They are mostly Arches brand, but some Lanaquarelle, too.  I'm going to get them out and paint on them - what's the use of having things if you never use them? 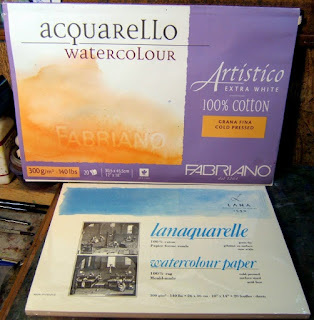 What am I going to paint on them?  Mostly birds.