Found a small and larger piece of Multimedia Artboard I purchased a long time ago.  The paint sits on top of the thin board, which makes for some interesting textures and open spaces.

For the next few days, I'm going to be participating in a Sketchbook Revival free online course - lots of videos to watch and lots of good ideas on how to revive your sketchbook.  It's hosted by Karen Abend and includes Danny Gregory, Ria Sharon, Shelly Klammer and Val Webb (I've taken 2 online courses from Val and she's great) - and lots of other artists who take us on a journey through their sketchbooks, their processes, and what they want us to do = jump in and have fun.  I've watched 3 episodes so far and am enjoying it.  I'll share some of my sketchbook entries later...

Of course, that doesn't mean I won't be painting others things, just that I'm including some sketchbook drawing/painting/collage into my usual practice.

NOT SURE ABOUT THE BACKGROUND IN THIS ONE 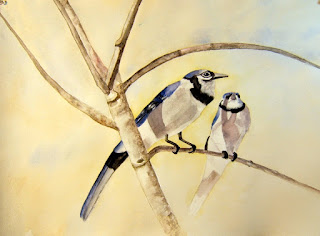 I was thinking it was done but...
Not sure about the background in this one.

I think it needs more color there.

What do you think? 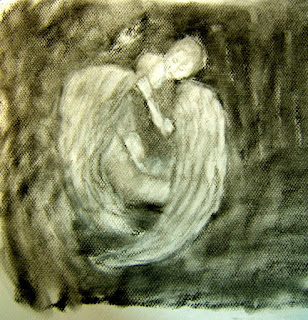 Another charcoal on a sheet of cream colored Mi-Tientes paper (has a rough texture to hold the charcoal). 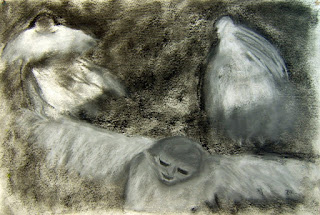 (Think I'll change the one in the back right who looks like a blimp.) 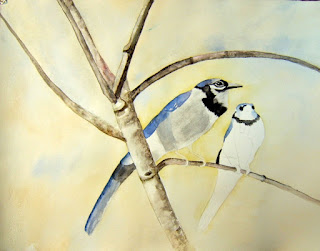 Almost done but some more color and shaping to do on both birds before it's finished. 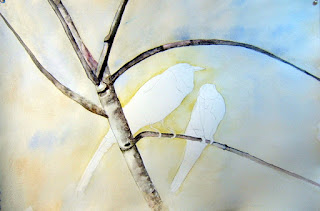 The Winsor Newton texture medium dried on the branches and I began painting them, paying attention to the colors and lights in the photo.  Added a little Cobalt blue to the background sky while it was wet. 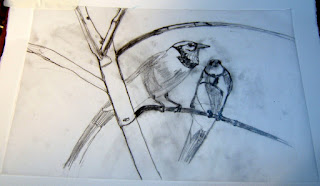 From a quick photo taken out the kitchen window, a mama bluejay feeding a baby.  This one shows both of them but not the actual feeding (didn't care that much for that photo as a future painting). 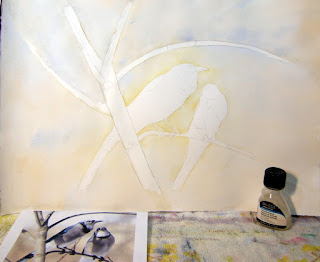 I printed out the photo to 5 x 7 inches and then, taking a half sheet of tracing paper, I drew the image on the tracing paper.  Then traced the drawing onto watercolor paper (a half sheet Arches 140# coldpress).

Before I began painting the background, I used Winsor Newton Texture Medium on the branches to give them more oomph.

After that dried, the background was painted.

Although I'm calling this Blue Jays in Spring, we are not really having spring - or just a few hours in between snow squalls.  This has been the strangest spring season yet for us and one doesn't know whether to put on a coat, a jacket, or a teeshirt.  I guess it could be worse.  We are, at least, not having feet of snow dumped on us (like they are in the northern plains).  I keep thinking spring will come...but what if it doesn't?  I ordered some Heirloom vegetable seeds for my Mom to plant - we may have them late this year as we are still having frost warnings at night.  OK, enough complaining.  I am lucky in so many ways and looking out on the mini-blizzard of snowflakes is actually very beautiful. 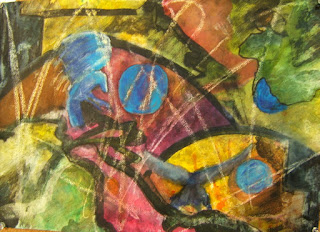 Small changes are being made, but it's not changing much.  Perhaps I'll put it away for a while and get it out later to see what it needs. 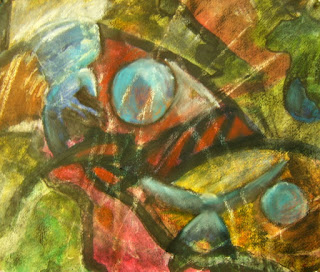 This is the last iteration.

Think I'll put it aside for now and come back to it another time.  (You can see where I cropped off the edges, lightened some areas with oil pastels.) 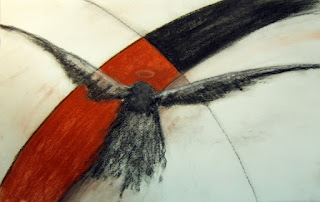 Got out my charcoal and conte pencils and sticks and blocks.  Used a fourth sheet of Arches 140# coldpress. 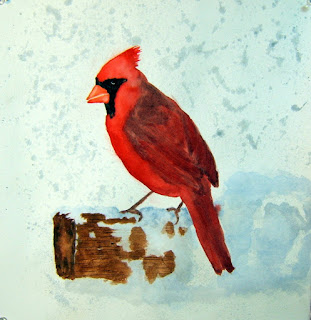 A bright papa red bird (cardinal) in the snow.


Are we finished with snow yet?  Maybe?
Posted by RH Carpenter 4 comments: 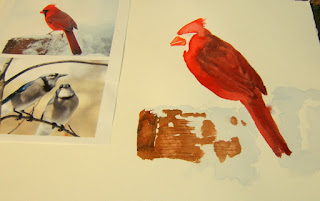 Yes, we got snow again.  Maybe Mother Nature doesn't know it's April?
Anyway, with snow comes bright red cardinals.  I put out lots of food for them all but the cardinals know how good they look in the snow and are the first ones to arrive.


Several years ago, I learned that Papa Red cares for the babies after they've fledged out of the nest - he is constantly gathering food and feeding them, and keeping them hidden until they can feed themselves.  What a good Papa!  I'm sure Mama is sharing in the duties but it's that bright red spark of color against the snow that gets the attention = so handsome!
Posted by RH Carpenter 6 comments: 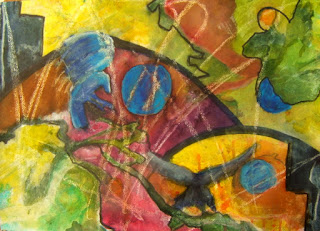 Continuing to work this piece to see where it goes...

This one has some pastel pencil on it.
Still needs to be toned down, I think.

(Not sure how that green, flying cat holding the blue ball got in the upper right corner??)
Posted by RH Carpenter 4 comments:

AND SO IT CHANGES 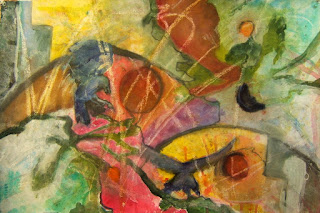 Using a mix of white gesso mixed with water and acrylic matte medium, I covered over bits and places on the original painting.  Then added more in using the same materials as the original painting = watercolor, walnut ink, water soluble graphite pencils, watercolor inks, etc.  Whatever comes to hand, I use to make marks and changes.


It's still too close to the original so more changes to come.  I just want to see where this one ends when I've finished (or cannot add anything more to the paper). 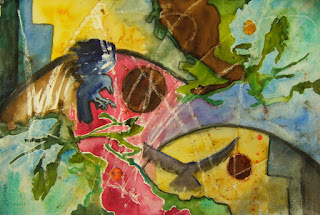 
Next = to remove, add, change what's there to become something else...we'll see where the muse takes me.
Posted by RH Carpenter 5 comments:

There's One in Every Crowd 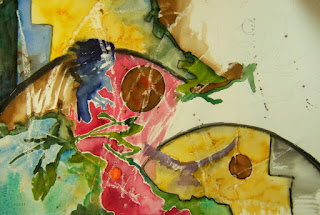 This one is going to be a work in progress for a while, as I cover/uncover/
change/revise until I get it where I want it.