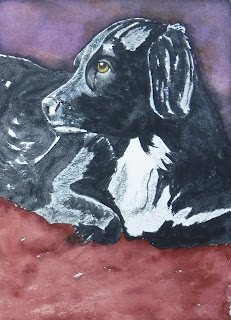 Our dentist got a new dog.  His name is Otis.  He is an old soul, totally chill and so people friendly that  everyone who meets him loves him - he’s great for hugs and attention when you need a therapy dog at the dentist!  The dentist posted a photo of him (he posts one every so often so we Otis fans get our fix) and I liked it so much I thought I’d try to paint this mostly black dog with the pretty golden brown eyes.  This is on a block of Arches 140# coldpress using only 2 colors - Lunar Black and a bit of Cerulean Blue. Made a few changes and I think I like it better now. 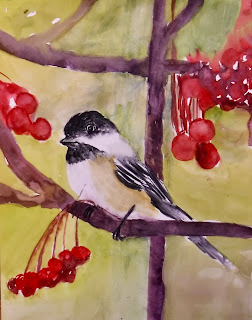 This one is on Stonehenge Aqua hotpress paper.  I purchased a block a long time ago and only use it rarely but wanted to try to do the chickadee and berries loosely.  No drawing, just painting. It may need something else but maybe okay for now, although now I’m looking at it, I see I didn’t think about those hard lines of the branches.  May be able to soften or change them so they aren’t so straight. 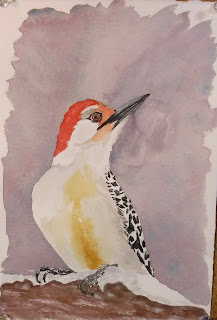 About fourth sheet Arches cold press.  Big Red.  We have a few come to our suet feeders and they are loud - but I love ‘em.

Painting a few holiday cards for next year, but in between cards, I’m painting a few birds.  Trying to stay loose and light.  Next one will be on hot press (I don’t use it often).

Sweetie and I got boosters this afternoon.  Hope we do well with them as I have a recheck with the ortho tomorrow morning (hope to be able to leave the boot behind although walked with both shoes on today and it was painful and my right foot is swollen so much…hope I don’t have to have a bigger size shoe as then I’d need 2 pairs all the time to fit both feet right!!). 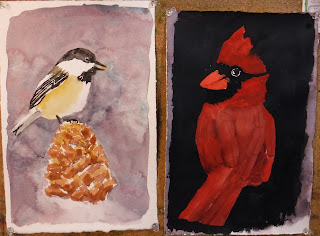 Well, made a mess of the cardinal but it was the first thing I’ve done other than small cards in weeks.  I became less heavy-handed with the second one - the little chickadee.

Have another to share and another in the drawing stages.  Just fourth sheet paintings for now.

Still in the boot and have had one physical therapy session (with exercises to do at home on my own until I can get a second session later this month).  I should be out of the boot and walking (without a limp, I hope) before Christmas. 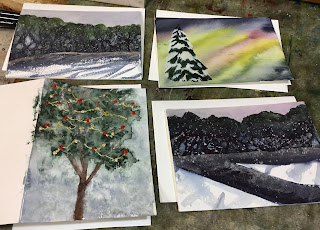 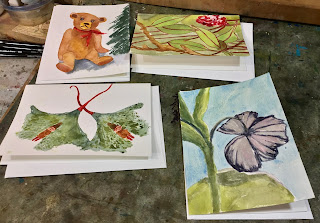 SEEING RED - BUT IN A GOOD WAY 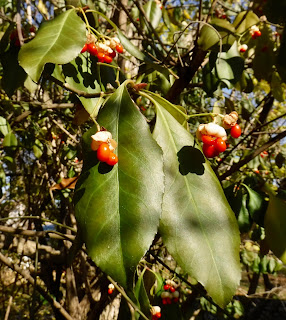 Walking in the boot to the back deck and finding lots of reds all around, so took a few photos. 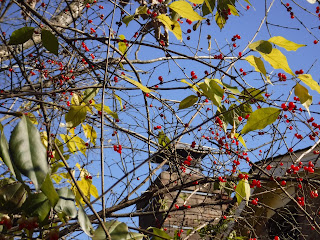 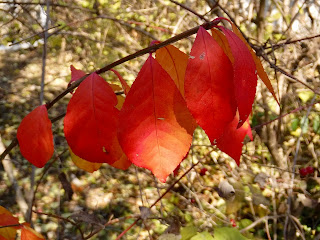 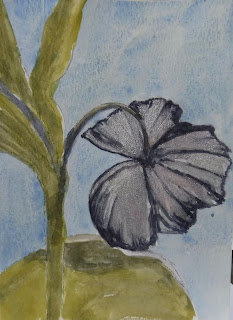 Used the silver Schminke dry pigment on the flower.  Some of these may turn out to be Christmas cards this year and some will not make the cut. 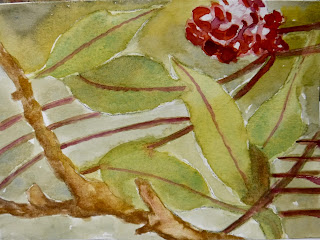 FINALLY IN MY ART ROOM 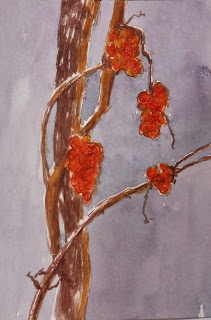 Finally made it into my art room - had the inclination and the ability in this boot (slow going down the stairs but I can do it).  So made up some Christmas/holiday cards.  Some will make the cut this year and some won’t, but at least I’m getting out the paint, pigment and paper after weeks of doing nothing creative. 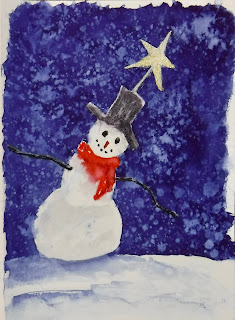 Used the gold dust dry pigment (Schminke) on his star but it’s so heavy it tilts his head :)