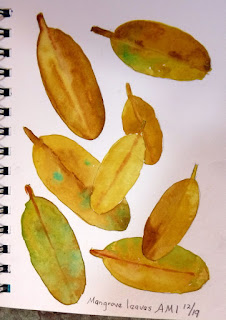 Picked up some mangrove leaves that had fallen on the dock outside our house, brought them in to save for a quiet day.  Painted on the counter in the kitchen while Sweetie watched a U.K. basketball game. 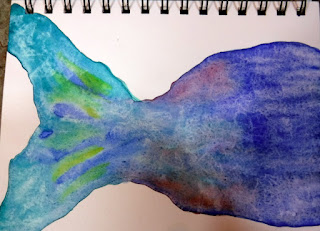 Didn't see any mermaids this trip, but did read about them in a very cool book by Christina Henry called Mermaid.  If you like interesting historical fantasy, you'll like it - and it's great to take to the beach with you.

A couple of paintings in my sketchbook - the whole sketchbook is filled with trips to Anna Maria Island and nothing else - from 2014 to 2019.  Time to start another!

When we arrived at the house we were renting, we unpacked and put things away, put away groceries, and then walked out to the canal and sat on the dock for a while.  For the first time ever, we saw 2 manatees swimming right by us!  It was great to see them.  But that was it for the trip, as we had a bit of a cold spell that chased them into warmer waters after that. 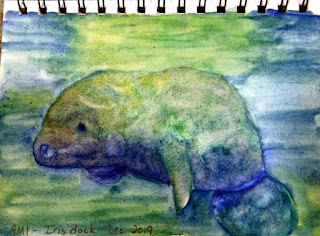 Because of that visit by the mama and calf, we were inspired by manatees the whole trip, Sweetie even getting books on manatees at the library to read up on them and I, of course, had to paint a few. 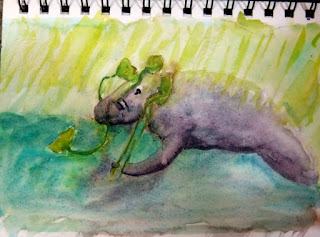 So we met up with a friend who moved to Bradenton/Cortez from Kentucky and she told us about a spot that had manatees.  We drove over there and, sure enough, there was a mama, a calf and big daddy swimming in a little area where the locals keep their boats.  Amazing!! 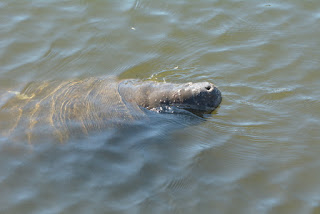 Now, you really cannot get great photos of them, but you can see their cute noses coming up for air and see, through the water, their big bodies, as they glide along. 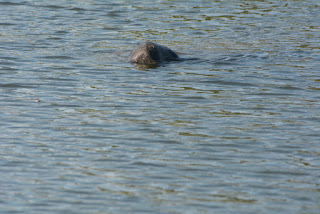 And this is big daddy - he didn't come in as close as the mother and baby, but we could tell how big he was by that head coming out of the water. 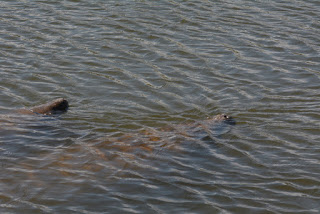 And this is the mama and calf swimming together, coming up for air. 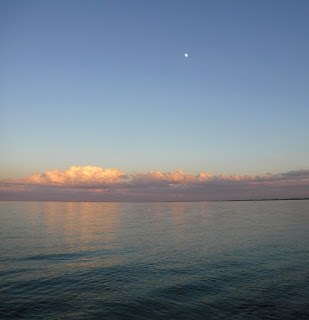 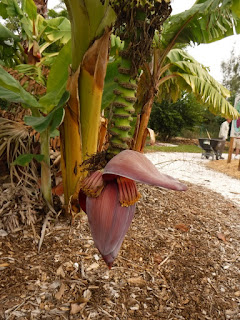 The Palma Sola Botanical Gardens are beautiful any time of year and this gorgeous banana plant was showing off for us. 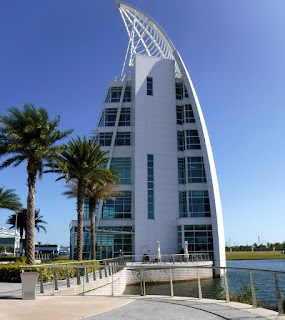 This was the Explorer Tower at Cape Canaveral.  From the 7th floor, you walked outside and could see the bay with the huge cruise ships, the other boats, and the water all around.  Exhibit included about Kennedy Space Center and the astronauts.  (We even saw the launch of a satellite from the Kennedy Center from the yard at the house we rented.  It lit up the sky and soared across the sky.  Pretty cool.  We just happened to be there on a night it happened.)

Getting over the ear infection and cold.  So felt like downloading some photos from the trip. 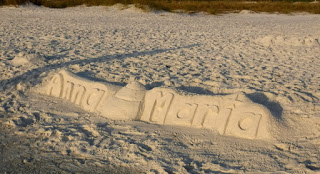 Walking to Bean Point to see the sunsets and catch photos of shore birds. 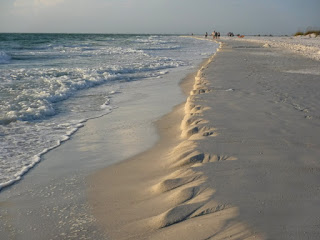 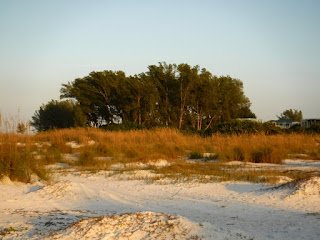 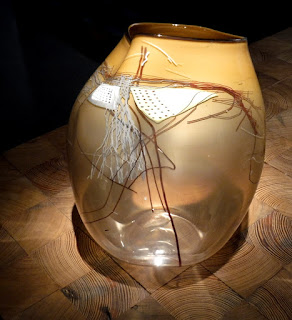 A short drive up to St. Petersburg to visit friends and to see the Chihuly Museum of glass art - and walk across the street to see the glassblowing exhibit. 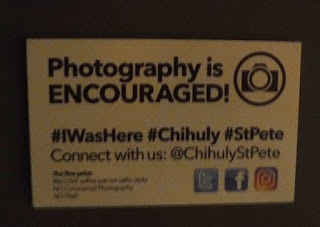 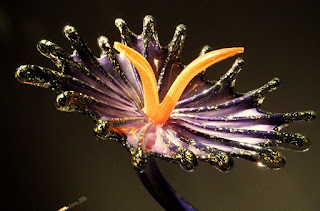 Well worth spending an hour there seeing his work and seeing the recent exhibit on display of other glass artists. 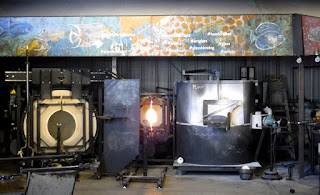 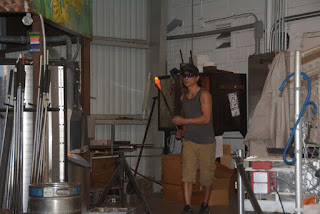 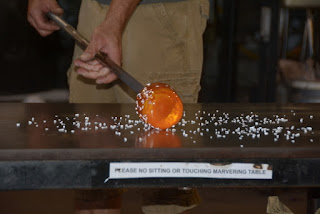 See glassblowing demonstrations right across the street from the Chihuly Museum - included in the price.

Returning from 2 1/2 weeks of vacation and rest/relaxation in Florida, I had a slight cold but, apparently, a whopper of an ear infection.  Thought my head was going to explode on the plane as we landed (both times, since we had a 2-plane trip from Orlando to Cincinnati through Atlanta this time).  Also, I HATE the Orlando Airport and hope to never have to go through there again.  Another story.

Anyway, a major ear infection (the first one I've had in my life), a visit to a nurse practitioner since my doctor was not going to be in for days and she gave me whopper antibiotics to fight it and said the cold would just have to play itself out.  After two days on the antibiotics, I was no longer contagious (not sure how that works since the cold can't be helped by antibiotics and I was just taking Dayquil and Nyquil to kick it and drinking lots of tea with honey).  But glad of that because my amazing cousin finally lost her battle with metastastic breast cancer and died while we were in Florida :(  And her services were Friday and Saturday.  A strange affair because she said she didn't want a service so...no one spoke or no one said a prayer or no songs were played.  Just everyone talking with everyone else.  There was a nice selection of photos of her showing on two screens.  She was cremated and we had the grave-site interment Friday afternoon before the memorial service on Saturday.  She was placed in the grave of her mother (didn't know they could do that).

So...also needing to get all the presents ordered and, hopefully, delivered in time - and wrapped - and...well, it's been a long few days and it seems like a month since we've been home but it's only been a few days.

I did paint while I was gone and will share those few things and the photos taken of the warm, sunny beachy days we were gone.  Here, not too shabby = 50 degrees today and 55 tomorrow and 59 the day after!!!  I hate that this strange weather is caused by global warming, but will take the warmer weather for a while in December and January as an effect of that.  I really am not a fan of winter.

I'll return soon with paintings and photos and, hopefully, drawings I still have to complete from my online course (Val's gotten a bit behind in her postings, too, so I'm not too far behind!)

I hope your holidays are warm and wonderful
with family and friends galore.
I wish you all the best in the New Year to come
with days and nights full of fun.

Take care, my friends.  Hug a friend, call a relative, send a card...you never know when it will be the last time you get to say, "Hi!" to that special person in your life.  My cousin had just turned 70.  I don't know if that's too young to die or just the right age, or whatever, but I will always miss her, her sense of humor, her wit, her intelligence, and her memory that held on to our family history better than I ever could.
Posted by RH Carpenter 2 comments: 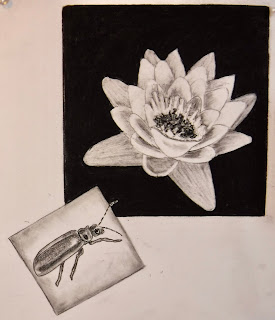 The flower is too dark.  Didn’t follow the instructions completely to find out the flower was to be done with just a dusting of the graphite/carbon black on a tortilla so went in and drew it, as usual.  Then, to make it look better, I needed to add the really dark carbon pencil background.

Oh, well.  I’ll do the next one right - and may redo this one later.
I like my little bug, though :).  Maybe I should just do little insects!?!

Hope you are having a good December leading up to Christmas and all the presents, family gatherings, etc.