THE LAST CARDS GOING OUT THIS WEEK 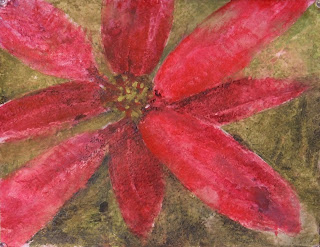 Painted this after covering a failed painting with white gesso.  Then painted over that - you can lift right back to white, if you don’t use staining colors.

Then I cut it down to glue onto the front of a blank card = voile!  Holiday/Christmas Card!

These two are my favorites due to a new technique and medium taught by Angela Fehr in her online workshop = dark dark dark colors, then shaping the trees, etc and then brushing or splattering a bit of Schminke Aqua Bronze pigment (it’s dry in the tiny bottle) to get the shiny snow look.  Pretty cool and I know I’ll use this technique again because I bought 2 bottles of the Aqua Bronze (one in silver, one in pale gold).  What fun for traditional holiday cards.

We are going to have our first snow the season here in Northern Kentucky.  Time to hibernate until spring. 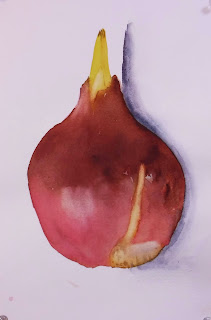 Just another small warm-up painting, trying to get the 3D look to this.  A simple bulb (onion or flower bulb, I don’t know).  It did not look right until I added the shadow shape behind it. 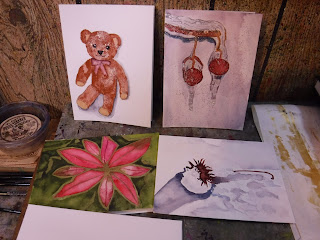 Put some color in the fuzzy bear, and did a few more cards.  Most of these are for family but some will go out to friends - one is making it’s way to Australia right now! 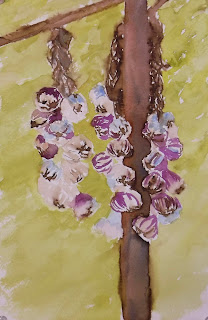 In the Angela Fehr course online, she says try to get in the habit of doing warm-ups so that’s what this is.

Using Daniel Smith walnut ink to draw the garlic cloves and ties, I then put some color on with watercolor - not too much - wanted to keep the whites in there for a lot of them.

Posted by RH Carpenter No comments: 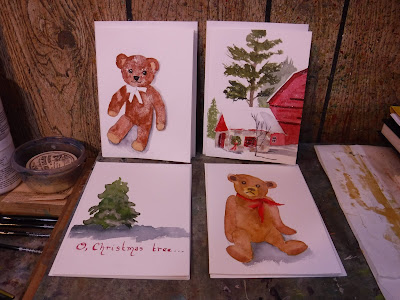 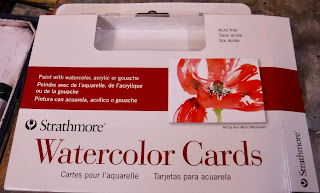 Every year, I made a few holiday cards for family and close friends.  I’ve made a few this week and will be making a few more.  I have some left over each year, too.  These are on Strathmore watercolor blank cards for watercolor and work well for little projects. 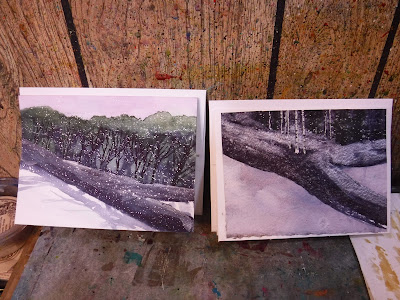 If you can’t be with your loved ones this year, send them a personal card.  I guarantee they will tuck them away after the holidays and keep them to be displayed next year - when you can all get together again.

SERIES OF PAINTINGS AND VALUE STUDIES AND...

Many years ago I heard of Mike Bailey and followed his blog.  He went into working in a series and that became his thing.  Now, not just 3-5 or 7-9 paintings, he challenged a student of his to do dozens of paintings using the same still-life set up and see where it took them.  She stopped at the required number (I think it was 25 paintings) but he kept going...and going...and going.  Now, he talks about that series and shares the paintings that came out of that experience.  I’m afraid I don’t have that determination, but, in the Angela Fehr online class (Watercolor Mastery), she talked about working in a series and what you can learn from it.  So...I got out a photo I liked and did a few...just a few. 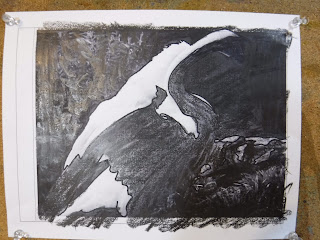 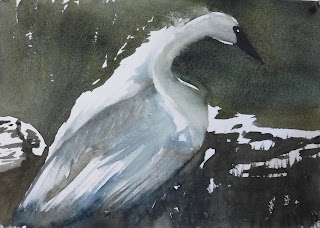 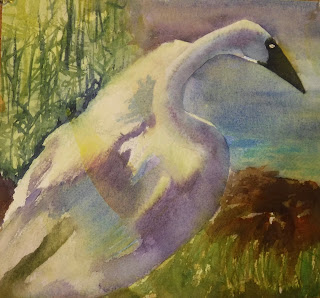 Then going in with lots of colors, then more muted colors (my favorite one). 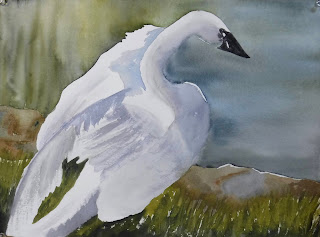 I even abstracted a couple versions and might show them later.

I think I did 7 in all and then had to move on to something else.  Maybe if I had started from a still-life, I would have had more enthusiasm for a long series...nah, probably not! ha ha

WHAT HAS EIGHT ARMS AND PLAYS WITH LEGGOS? 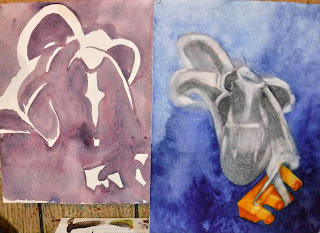 Tried to give this old painting a bit more oomph by working to maintain the whites better.  Started by doing a black and white Notan of the photo, then this value study keeping out ONLY the whites.  That helped me with the painting.  Then I went into the old painting and just lifted out more white areas than it had before.  I like it better but will probably do this one again and really keep those whites clean and bright without any color.  I see I need to darken her eyes, too.
When Sweetie first began volunteering for the Newport Aquarium here close to home, he was in charge of feeding their new (and first) octopus, Olivia.  He would come home with sucker marks all up  and down his arms because she was “very affectionate and playful”, trying to hold on to him and pull him towards her in the tank as he fed her from above the tank.  Later, he didn’t get to feed the octopuses but just worked in water quality and I know he missed the interaction with the critters.
Octopuses are smart and need mental stimulation so aquariums often give them toys to play with to keep them interested.  They don’t live long in captivity or in the wild - just a few years.  I’d rather see them in the wild, but haven’t gotten much chance of doing that since I don’t scuba.
Posted by RH Carpenter 3 comments: 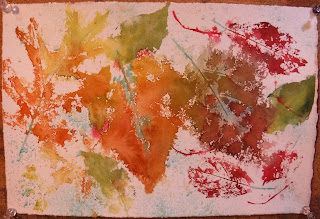 Bringing in the last of the autumn leaves, wetting them and pressing them, then using them to make watercolor prints.  Simple the easy and you often don’t know what you’ll get, depending on the pigment you use and how thick it is on the leaf.

We had about 20 Halloweenies come by from 6-7 Saturday, socially distanced (for us, not the Halloweenies, who were running around in groups with Moms and Dads - none of whom wore masks).  It was a beautiful day - warm and sunny and a gorgeous full moon coming up by 7:30 pm!