I thought last week's pose was hard...then we had this pose! No one said art was easy...did they? If they did, they were wrong. 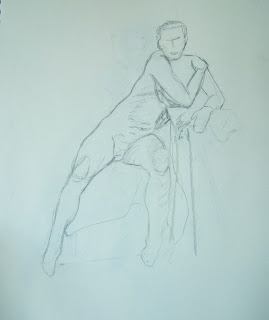 A sitting pose, torso twisted, one leg out to the side and one leg bent and, from my position at the easel, very foreshortened. Foreshortening is the Wicked Witch of the West!!! It messes with your mind. You "see" it...but you don't draw it that way. I'm so thankful for my kneaded eraser who does so much work for me. If I could learn to draw with a lighter hand - fine, light lines that shape things until they are about right and then darken - but I have a heavy hand and I may have to work hard to break that habit.

(I started this and wasn't getting it right, not getting the right leg out at the angle and thinning his middle and...well, I finally just started over.)
So...my apologies to Brian, our model, who did a fine job and really held that pose for long periods of time (I think he only took 3 breaks in the 3 hour session!). It doesn't look a bit like him but I will work on it to get the face more correct, using Brian's webpage photo. 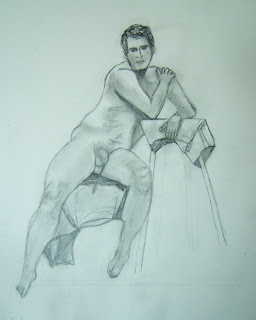 Brian models for all the art classes in the tri-state, from the Cincinnati Art Academy to Northern Kentucky University's art classes and everything in between, including studio sessions with artists, one-on-one. He's been doing this for years and knows his stuff.
If you think, "Well he's just sitting there. How hard can it be?" Put yourself in this pose and then hold it...without fidgeting, without moving...for an hour! Then take a 5 minute break, or 10 minutes...and go right back and get in the same pose and hold it for another hour. I can't imagine how many of my limbs would be numb and how my behind would be in pain from leaning like that. Models...good models...earn their pay.
And it was a pleasure to find out Brian's been following my blog for a while :) It's always fun to find out someone has been watching your work and reading your chatter for a while!
Now, off to work on Brian's face so it looks more like him and less like a certain fromer U.S. president!

I envy you this class, Rhonda. I took figure drawing for a while, but the price for the classes got raised a lot, and I couldn't afford it anymore.

And as for how easy it is to be a model, once or twice when the model didn't show up, we had to take turns being the model for 15 minutes. Those were the longest 15 minutes I've ever been through. It felt like about 2 hours. :-)

Oh, and your sketch is terrific!

Rhonda, you are really getting those muscle shapes, especially in the legs. You appear to have the foreshortening down too. I'm wondering if the right foot would be larger because it is closer to the viewer?

Rhonda,
Looking good, capturing the figure is the most difficult task any artist could endeavor upon, besides capturing light that is, and then trying to capture the figure in light now thats even worse, Oh boy, now that I think of it, art itself in any form is a difficult task is'nt it? LOL

Wel anyway there is a great website that I look at and has digital versions of books by Andrew Loomis he was a great illustrator during the hey day of great American Illustration he has a nice way of explaining and showing how to capture the human figure you might want to check them out specifically the Figure Drawing book found here http://fineart.sk/index.php?cat=1

Keep at it Rhonda!!

I feel your pain!! Life drawing class was my nemesis in college!! Silly little saltshakers are much easier!! ;-D

Rhonda - I agree, you really are getting good at the anatomy part with the muscles. I, too, wondered about the size of that right foot, but also the size of his head. It seems a bit small compared to the size of his upper body, but you were there and I wasn't, so I might be way off on that.

I cannot imagine holding a pose for that long, I probably would fidget too much for the class to get the pose. I also get itchy and would just have to scratch!

Well done on your second full pose life class. You seem to observe foreshortening very well so early in your studies - both with Julia and Brian. Assume you are using charcoal - does the tutor suggest alternative media ?? It can be great fun though challenging... especially watercolour.

Thanks, Michelle, I know many bloggers aren't near enough to a city/university that offer figure drawing. It's a struggle but it's also fun and I feel like I am learning. I've had open figure sessions where the model didn't show up and we used the instructor instead :) ha ha
Ann and Susan, thanks so much and you're right: that foot has become so dainty it's almost comical!! And the head was smaller than IRL. The instructor mentioned it but told me not to fret over it since he's always on me for making my heads too big. Maybe I'm in a middle phase and soon I'll get them just right! haha
Chris, yes, still lifes could be easier...or not. All drawing from real life can be a challenge :)
Joan, we all work in whatever dry medium we want - I think I'll ask him to help me learn pastel or conte to broaden my horizons.
Paul, I'll check out that URL you sent. One can never have too many references for drawing :)
Thanks so much, all, for stopping by and commenting.

Only 3 break in 3 hours? NO · WAY, ouch!
But I bet you were thanking hte painting gods for having a model that didn't get off the posing chair so you could draw and check and draw and check and draw a bit more.... no matter how difficult you're doing a great you in your figures drawing classes Rhon, don't even mention foreshortening or she'll hear you and haunt you! shhhhhhhh....

Thanks for the kind words Rhonda. I admire your passion for art and your desire to learn so no need to apologize. Artists simply fascinate me which is why I enjoy reading your blogs. It also helps me to understand what their needs are and what inspires them which is always my goal as a model.
I actually wanted to stand but Charles instructed me to sit with a slight twist in the torso and show both hands and feet with a foreshortening aspect.

You're an inspiration to me too. (Remember what we talked about before class just before I went outside.)

I'll be modeling for your class again on Dec. 12 See you then!

Thanks so much, Teresa...yes, let's not say that "F" as in "foreshortening" word! haha
Brian! Hey! Glad you posted and I'll see you Dec. 12th at our next session :) Take care until then.

hi rhonda. i really enjoyed reading your blog. i think your work on Brian's face is lookin' really good. i'm not an artist, but i would think the hardest thing to draw would be a person's feet and hands. i've never modeled for an artist, but may give it a try someday, so it's nice to see that artists really appreciate hard working models like Brian.

Thanks for stopping by and commenting, Missi. I see you're a local girl :) I hope all artists know how difficult it can be to hold a strenuous pose for hours!

I'm so jealous! I've been wanting to take a live figure class for awhile now - but haven't found one locally yet. You've certainly got a knack for this - your sketch is wonderful!!

Thanks so much for stopping by and commenting, Linda! I enjoyed seeing your blog and hope you are back painting very soon :)