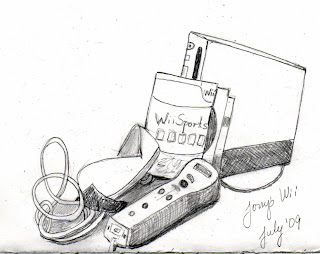 Sketched this Wii game and console and other stuff yesterday. Bought this for Jerry's birthday. His birthday isn't until August but he wanted it early so he got it early :) I wasn't sure it was something we needed to have around and that I would enjoy it but it is fun...well, some of it is fun. Some of it (like the tennis?!?) is just frustrating right now but I imagine we'll learn our way around it someday.

it took me forever to hit that dang tenis ball yesterday i hit it 14 times before going down in flames.. just got the wi fit too and its so fun.. might do more than walk by and dust.. hand in there and enjoy!! by the way like your idea on the portrait.. was thinking of a brown bag, myself..lol

They are a lot of fun! We don't actually have a TV at our little house, but my sister and her husband (who's home we're at almost daily) got one for Christmas and we had a lot of fun with it this past winter! MarioKart is our favorite. :)

I'm embarrassed to say I have sprained something playing wii tennis...or maybe it was baseball...or the bowling. Something in my left leg is now sprained :( How sad is that - I'm so out of shape I hurt myself doing virtual exercise!

Too funny! Well - it will be when you're done hurting and look back on it. Hope it heals up soon!
(and if it makes you feel better - the first time I really went shopping after quitting my overnight job I got blisters! It was the most activity I'd done in I don't know how long!)

You know, Angela, I'm not sure it was the Wii...I think it was wearing heels for the first time in years (except for 1-2 times on special occasions), and walking for over a mile - some of it up a steep ramp! I know my feet definitely were telling me to get those heels off! Makes me wonder now how I ever wore them when working.

Gotta love those heels! I no longer can wear them, ever. Plus, with my braces they would look very dorky! Rest yourself, take warm baths, and get rid of those heels!

I like the assortment of Wii paraphernalia, makes for an interesting still life!

Susan, they may make us look sexier and taller, but our feet do not appreciate it. I remember buying a pair of heels - tiny little grey suede sexy shoes - and then wearing them for 10 hours straight at my job (which was mostly standing on my feet). Of course that was many years ago...my feet and I are smarter now.

Once upon a time I was a hair stylist/makeup artist and what I absolutely loved about it was the reason to practically wear a costume every time - I had a very crazy/punky look back then. Now when I think about how many hours I spent on giant platform shoes and boots (were kinda my trademark) --- well, my feet and calves want to scream just thinking on it!