I am a creature of habit. I go into the studio and stand in the same place, setting up my tools and easel. Today I decided ahead of time to move from that spot! And then I took Nupastels to work on my Mi-Tientes paper. So things were different for me - enough to throw me off a bit, I guess. 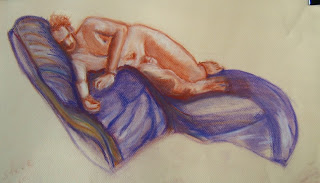 The pose was chosen by Robert and he worked at the model's feet so lots of foreshortening problems for him to work on. We were allowed to choose what pose we wanted today, and were going to do two poses in the 3 hours but ended up with just this one so we could spend more time on it. Maybe next time will be 2-3 poses instead of one single pose.
Not horrible but lots to work on, including how to just leave the pastel alone and layer the colors instead of blending them. I liked Steve's (our model today) reddish hair and that's why I chose the colors to start.

I really like the modeling on his upper thigh.

I applaud you and your hard work.

OMG, because it isn't difficult enough you decided to throw in some pastels too, right? LOL, yet you managed to do a good job, I like the work on the leg the best, both position and color!

Thanks, Bill, that's my favorite part of the whole thing, too - I think I got that right.
Vicki, thanks!
Yes, Teresa, I am pushing and then wondering why I don't feel comfortable with all the new stuff! haha

Good for you, changing spots and getting a different take on things. It might have been uncomfortable at first but you came through fine judging by your drawing.

Thanks, Ann :) If I had only stopped 1/2 hour sooner, I think the drawing would have been better. Why do they call dry media a painting? Do you know?

Hi Rhonda, I agree with Teresa, Pastels probably made the job a lot more difficult,but nothing ventured.... looks good and a lot of hard work.

Thanks, Cathy. I just felt I needed to expand a bit with something other than graphite this time :)