For some reason my point and shoot Fuji loves blue as much as I do - unfortunately, it doesn't "see" the violets and the darker blues in this painting so everything looks pretty much the same cerulean-teal colors. I had Jerry take this with his good camera and it's closer to real life. 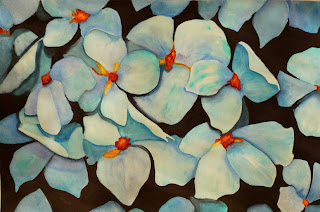 Sorry about posting the other without correcting it (or at least trying to correct it). I blame the migraine. Which is not causing me pain but is lurking around my neck and shoulders like a vampire waiting to sink his teeth in - now if that vampire were (no, not the teenybopper guy from Moonlight) Mick St. James from Moonlight (the TV show that was cancelled after 2 seasons), I wouldn't mind so much! (Mick was played by Alex O'Loughlin but he's since cut all his hair and gone over to be a heart transplant surgeon on Three Rivers.)

Cameras do have their little quirks, don't they? This photo shows a lot more variety in color and values!!

Hope the migraine vampire is long gone by the time you read this, my friend!!

Wow, what a difference a camera makes! Don't know why you don't like this!
Yep - Mick was GORGEOUS. Now that was a vampire who could bite me any day! And having seen "Twilight" finally, and read the 2nd book, I can see why the teens and tweens view "Edward" as a heartthrob! But I'm waiting for the DVD of "New Moon" - don't want to be in a crowded theater with all those screaming girls!!!
Glad the migraine is going away.

Hi Rhonda, What colors did you use for the background in this lovely painting?

WOW! I did like it before from the other photo, whites or not, but THIS is really luscious. Great job. It has a watercolor look with the gentleness of a pastel effect. Beautifully created.

Hope the headache/neck/shoulder agony is dissipating.

Well, I guess that's when price makes the difference :) Jerry's camera is a digital SLR - not top of the line but very good with lots of bells and whistles. Mine is a good little point and shoot but, apparently blue really gives it the tizzies! ha ha It's always good to hear from you, Chris - hope you are doing well.
Deb, it sure does make a difference and I know it's the camera, not the photographer, right? haha I don't usually like long hair on men but sometimes I'll make an exception :) hee hee
Cathy, the bg is done in a mix of Bloodstone Genuine, Perylene Green and a bit of Indanthrone Blue - just those 3 colors to get a rich black.

I like the way you built up the petals. Lovely variations in tone and color.

ah cameras and mauves, they just can't see those beautiful colors! still this pianting looks yummy, it worths all the effort you put into it.

Hope the migraine is gone by now Rhon, ouchouchouch

This is lovely!! Wow! Big difference with the camera's.
I see plenty of lights but know what you mean about leaving them - something I struggle with all the time.

Hope you are feeling better! When I'm feeling 'off' I don't dare work on paintings :) You are brave and disciplined!!

all the point and shoot cameras do what yours does. they up the saturation to enhance the colors. :(

This blues are really beautiful and I love that background. Hope you are feeling much, much better by now.

This photo is a lot better. I really like this painting. You don't have to have whites as ling as the values read well, which they do.

I just got a new camera and can't wait to see how much better my pix turn out - I hope!

My camera does the same thing with violets - it is very frustrating. This painting is stunning and delicately beautiful.

Gosh, thanks so much, Sandy and Kathy (I keep planning on coming back to Tuesday class once in a while and something always comes up!!).
Thanks for your comments on this one, Ann, Teresa, Pam, Vicki, Dawn and Barb.
I'm so glad you all like it this way and sorry about the earlier slap-dash photo of it that wasn't doing it justice. I have to spend more time getting the photo just right when I do a lot of blues!