Some more work on this one, darkening, shaping, blending...
I've decided I do not like Indigo by Daniel Smith - it's mixed with Lamp Black and it looks so flat and ugly when it dries. Time to retire that one and move on (Sandy M. said Indigo by Winsor Newton does not have black in it so may try it).
I worked more on it in class Tuesday, slowly building up color/value, and putting in dark background color (mixing the Indigo with Indanthrone and French Ultramarine Blue so it's not so flat). Will share that stage (3) later.
When I was at a point on it that I should stop and think more about it, I worked on the little piece of Indian paper Leslie brought each of us. She gave each person who showed up Tuesday morning a piece (she didn't know what it was called - just paper made in India). It was very absorbent, but fun to try to work out the kinks - paint and water sinks into the paper quickly so you get no time or no chance to blend well. Which means you have to work fast and wet. You can lift a bit but not much. So, in order to bring back some texture and lights, I added white gouache here and there and I kind of like it. From a photo in the Wet Canvas Image Reference Library by a member who calls herself Wendee. 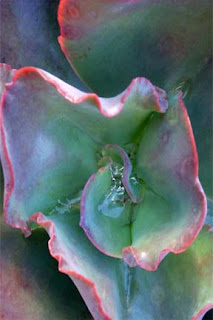 Wendee's photo on left.
My painting on right (as if you couldn't tell)! Done without any drawing, just drew with the red paint to begin and then added the other colors. 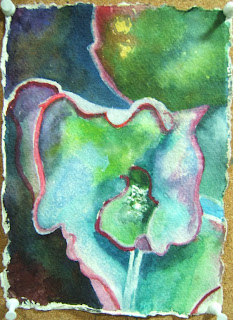 These are both wonderful, and such a contrast ... shows the benefit of being able to work both ways!
The curly cactus has wonderful colors and brightness; and I love the strong elegance of the analogous agave!

I love the little piece on the Indian paper! Very colorful and fresh. The irregularity of the piece of paper, along with the unpainted edges, also makes it look very spontaneous! Delightful.

Thanks so much, Laura and Chris :) The Indian paper is interesting - not sure I'd want to try a larger sheet (this one was about 5 x 7, I think), but it was fun to play with it in class and see what would happen. I appreciate Leslie sharing her papers with us!

Rhonda,
I'm having so much fun with this Painting a Day series, and I really enjoy reading all of your comments :)
Just wanted to say hello, and thanks so much!!
Laura

They both have beautiful colours and tones and shapes but I must say I have never heard of an 'analogous agave' before - did you make it up??? AA is looking so fresh, I'm wondering where you will take it from here.

They both look good - glad you are finally going s l o w l y - it is paying off bigtime!

Laura, I am enjoying your painting a day, too!! Glad you did this, even with a vacation in the midst of it :)
Joan, I'm calling it that because I'm using an analogous color palette (for the colorful watercolor group April project) and, well, I just like alliteration! ha ha
Deb, I sure didn't go slowly on the Indian paper one - whipped that one out in less than an hour in class! ha ha I do want to take time and see clearly for the agave, though.